Note: I haven’t posted in a bit…it has been a busy summer! I’ve been in South Bend, Indiana, this year and soon start a VAP at Notre Dame. If you’re in the Midwest and looking for someone for your seminar or to talk to your class, holler at me. 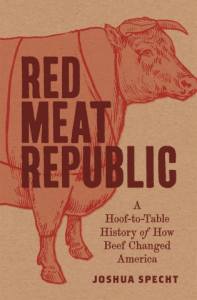 Below is a roundup of everything related to RMR that has happened in the past few months. Please indulge me, I needed to collect everything in one place. I promise I’ll be back to general teaching, research, job/grad school advice soon. Also if you have any requests/ideas for posts or general comments, let me know.

First, Red Meat Republic has a fantastic trailer. It’s in this really cool animated style and while it simplifies things, it covers some of the key points of the book.

A few pieces (by me) related to the book

Note: it is still a bit too early for reviews in academic journals, but hopefully those will start to roll in soon…

In The New Republic, Yale Historian and Law Professor Samuel Moyn wrote a very generous review. My favorite bit: “Explaining how Americans came to eat so much beef and to pay so little for it turns out to be an especially gargantuan enterprise, which Specht pulls off with aplomb, in accessible and sprightly prose.” Nice!

The Financial Times ran a nice review, although one (fair) criticism stuck out. You’ll know it when you see it. As an aside, I was honored that my book was reviewed alongside Darren Dochuk’s Anointed With Oil. Both books explore industries that fundamentally shaped American politics and culture.

A thoughtful (and expansive) review ran in The Baffler. This one was very cool since I grew up reading The Baffler!

A fantastic piece in Longreads reviewed my book as well as discussed (with great insight) current day issues with beef production.

The Sydney Morning Herald described Red Meat Republic as a “vivid account.” My book was paired with a review of Matthew Evans’ On Eating Meat, which now I very much want to read.

I was interviewed on two national NPR shows, both of which were really great conversations. Live radio is intense…oh and a few friends randomly heard me while in their car. Nice!  See 1A, “The Legacy of Red Meat in America,” and Think, “Why Beef Is What’s For Dinner.”

I appeared on WTTW’s Chicago Tonight. This is the only time I’ve done live in-studio television. It’s pretty crazy/disorienting, but I had a great time and the host was a real pro.

I also recently provided some historical context for a BBC World Service show on the global meat industry. The whole episode is pretty great.

I appeared on a few different podcasts. Some of my favorite conversations:

Okay so that’s more Red Meat Republic than anyone other than me (and maybe my mother) can handle. But I wanted to assemble a roundup of all the relevant coverage and also provide some explanation (justification?) of why my blog has been a bit dead. I’ll be back soon with more of the blog’s usual content.

And if you’ve read Red Meat Republic, let me know what you think either via email or on twitter at @joshspecht. More soon!